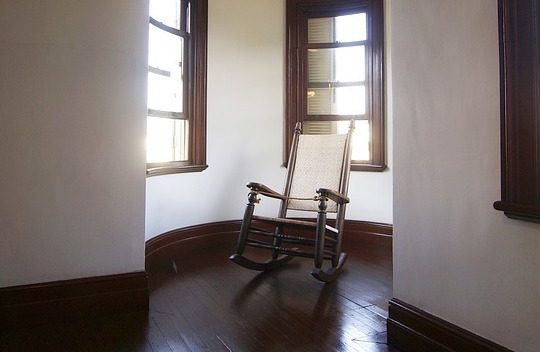 Imagine sitting on a slatted wood deck, listening to the rhythmic chorus of wind chimes, autumn leaves falling atop one another, and the soft sway of rocking back and forth in your rocking chair. As you do, we’ll share the history of rocking chairs and how Americans utilized this uniquely American furniture throughout history and today.

When Were Rocking Chairs Invented

The word rocking chair didn’t appear in the Oxford English Dictionary until 1787. When it did, Benjamin Franklin was credited with their invention in 1710. While Franklin received the credit officially, popular opinion is that early American cabinetmakers and farmers are actually responsible. Regardless of the original inventors, we know one thing—rocking chairs hold a special place in the culture of our country.

Throughout history, the basic structure of the rocking chair has remained the same. There are two curved bands (or rockers) on either side of the chair that contact the floor at two points. Unlike a conventional chair with four points of contact, the rocking chair allows its occupant to sway back and forth using minimal shifts in their weight.

Relieving pressure off your back by gently rocking backward is a common luxury now. However, before the advent of the rocking chair, there was no safe way to produce this motion.

This ability to relieve aches and pains, and produce a calming motion using a small amount of self-propelled movement, was a boon to farmers and other early Americans. While their daily routines included a great deal of physical labor, rocking chairs gave them the ability to literally “take a load off.”

The history of the rocking chair begins in gardens and on porches. As outdoor furniture, their original designs were simple—they were conventional chairs with two pieces of curved wood attached to the bottom on either side of the seat. There is reason to believe the first rockers were designed as a means of helping busy mothers rock their babies while keeping their hands free for other household chores, such as knitting and sewing. Whereas mothers used to sway side to side with their children in arms, they could now place children in their laps and use their legs and back to create the rocking motion.

Most conventional chairs were invented in England or France—wing chairs, Windsor chairs, and chaise lounges, to name a few. Though these original designs have been slightly altered to accommodate changing aesthetics, decor, and fashion, the basic structure remains unchanged.

Chaise lounges, for example, originate in France. They were designed by French furniture craftsmen so wealthy citizens could rest without retiring to their bedrooms. To that end, the basic design includes a long seat and one armrest. Though they are no longer reserved for the elite, taking on new purposes in modern-day decor, their structure is the same.

There is no connection between the rocking chair and Europe or France. There is, however, evidence that Europeans found them distasteful. Harriet Martineau, an English writer who visited America in the 1830s, wrote of the rocking chair, “How this lazy and ungraceful indulgence ever became general, I cannot imagine, but the nation seems wedded to it.” Perhaps Ms. Martineau did not consider that rockers provide the advantages of a conventional chair without expensive upholstery or rigid structure. And given her opinion of them, we’re confident she never had the pleasure of sitting in one.

As time wore on, the history of rocking chairs progressed from small gardens at the edges of dirt roads and farmland to the presidential suites of several United States presidents. Jimmy Carter and Ronald Reagan owned Maloof rockers, while John F. Kennedy used a rocking chair featuring a traditional Appalachian design. To this day, these chairs are referred to as Kennedy Rockers, which we are proud to manufacture in our shop.

John F. Kennedy had a documented back problem, and, as a result, he owned 14 rocking chairs, which he relied on for their palliative effects. His rockers were relatively simple. They were made with oak frames and woven-cane seats and backs. In fact, it was the rustic, antiqued American appearance of his chairs in juxtaposition with the Oval Office’s opulence that captured the country’s nostalgia. During Kennedy’s presidency, rocking chairs were sold throughout the general public in record numbers.

The beginning of the rocking chair concept began with tying skates to the bottom of an English Yorkshire Windsor chair in 1725. The word “rocking chair” entered the dictionary in 1787 and the Shaker rocking chair was invented in New York in 1820. In 1825, the Boston Rocking Chair emerged. The first wicker rocking chair was created in 1860. Varying styles of rockers continued to be manufactured throughout the next century. The Kennedy Rocker was recommended to JFK by his physician for back pain in 1955 and later became a staple rocking chair in American homes. See a full timeline here.

As you can see, the history of rocking chairs is as American as apple pie. Just as conventional chairs fashioned in England and France went through aesthetic transformations, so did America’s rocking chairs change with the times while still maintaining their structural integrity.

From the Cottage Rocker to the Plantation Rocker, Classic Cane Rocker, or the Official Kennedy Rocker, you can see that while rockers have evolved to suit different styles and decor, the original design remains intact.

Are Rocking Chairs Good for Your Back