US Open Helps Put Troutman Chair on the ‘World Stage’ 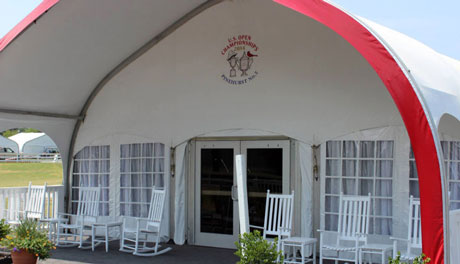 Champ Land knows there is nothing like sitting in a rocking chair to cure what ails you, whether those ailments be physical or mental in nature.

As owner of the 90-year-old Troutman Chair Company, Land knows a thing or two about rocking chairs.

The folks who hand out one of golf’s most coveted prizes, the Men’s and Women’s U.S. Open Championship, know as well that rockers are good for the seat and the soul. And they caught wind of Troutman Chair’s nine-decade reputation.

In the next few days – whether your sensibilities about golf extend only as far as a general knowledge that it’s something involving a little white ball all the way up to planning your week around your many outings on the links – you are going to be hearing quite a bit about the sport.

The U.S. Open is coming to North Carolina. The Men’s and Women’s Open tournaments will be played in consecutive weeks in Southern Pines. It marks the first time the United States Golf Association has attempted such a thing. So the high hype typical of either event – when they are held at different venues at different times of the year – is going to be magnified by what will unfold when they are held on the same golf course, the fabled Pinehurst Number 2, in back-to-back weeks.

If you are lucky to make the 80-mile trek from Iredell to attend either or both Opens and happen to find yourself sitting in an ample-sized white rocking chair a one of the massive hospitality “tents” at Number 2, it is almost certain you will be finding comfort in a chair made right here in Iredell County.

“First they ordered 500,” Land said. “Then on Memorial Day weekend, they order another 100.” The chairs are all in place now.

Land said the USGA had a person in place for two years putting the Opens together and said the call to Troutman Chair is more than just a feather in company’s cap.

“They could have gone anywhere in the world to get their rocking chairs,” Land said. “And I’m honored that they chose us. These events put North Carolina on the world stage.”

And a little part of that stage will be occupied by Troutman and its famous chair company.