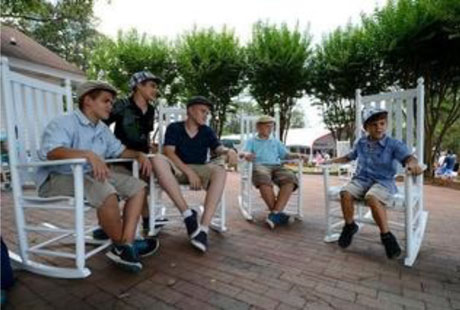 The Iredell County furniture maker whose rocking chairs line the atrium of Charlotte Douglas International Airport is showing off its wares this week on a new stage: the U.S. Open.

The U.S. Golf Association purchased 600 classic white rocking chairs – as well as 250 tables – from Troutman Chair Co., owned by Champ Land and his wife, Jean. The furniture is spread across the 44 front porches that adorn the corporate tents at the golf tournament, underway this week in Pinehurst.

“We wanted to have all of our guests really experience Southern hospitality,” said John Palacioz, operations manager of the golf association. “Having these white rocking chairs and side tables truly speaks to what Southern hospitality is all about.”

The spotlight is brighter than ever on this year’s golf venue, as the men’s and women’s tournaments are taking place back-to-back on the same course for the first time.

More than 400,000 people are expected in Pinehurst this week and next for the two events, said Caleb Miles, executive director of the area’s convention and visitor’s bureau.

For Champ Land, the chance to furnish such a large event means more exposure for his 90-year-old company, which employs 25.

“When you get an order like that, that you’re going to get noticed for, it’s always nice,” said Land, who bought the company in 1999.

“If you make the best product and you’re small, you just need more people to know that.”

At a time when much furniture production has moved overseas, Troutman’s chairs are North Carolina-made. “That’s the reason they picked us,” Land said.

Local loggers supply the company with massive oak logs, which are then milled on-site at Troutman Co.

Employees assemble each piece by hand, avoiding glue and relying instead on the wood’s own moisture to keep the pieces together. One post will swell while another shrinks, making for a sturdy bind.

“This is a chair that’s gonna last,” Land said.

He said the U.S. Open order came in two parts. First, in January, the golf association asked for 500. By Memorial Day, they wanted 100 more.

“Then it was just a matter of booking out production,” he said.

But Land wasn’t worried. The 600-chair order was large but doable – “not a week’s production” for a company that produces more than 25,000 rockers each year.

Once the wood is prepared, Land said the chairs – lauded for their double-scooped seats – can be put together in as little as 30 minutes.

No stranger to big orders, Troutman’s rockers have graced Charlotte’s airport since 2007, when the airport purchased 100 to replace rocking chairs from another vendor. Another hundred were added before the Democratic National Convention in 2012.

Recently, though, Land said times have been tough for his company, a small business trying to sell high-end products in a slow economy.

As a wholesale retailer, Land’s focus is on selling to smaller furniture retailers, “and some of those people’s doors are not open,” he said.

Depending on the retailer, his classic chair can sell from a little above $100 to more than $300.

“I don’t think anybody that’s in business is saying things are booming,” he said, but he added that sales have been up about 3 percent so far this year.

As far as rocking chairs at the U.S. Open, Land says the combination makes perfect sense. Rockers, after all, bring relaxation. On that subject, Land likes to quote British golfer Harry Vardon:

“For this game, it’s absolutely essential that you have a tranquil mind.”