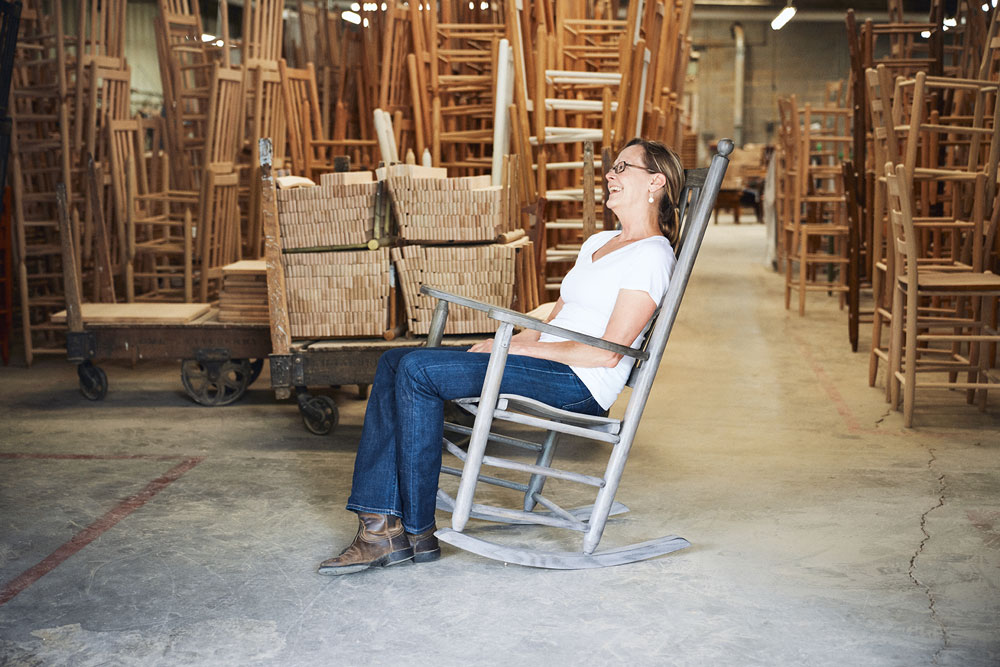 The expression “The more things change, the more they stay the same” applies to Troutman Chair Co. these days.

Six years after buying the company, the husband-and-wife ownership team has come up with a variety of new ideas to solidify Troutman Chair’s decades-old reputation for quality furniture.

That’s exactly what Champ and Jean Land intended when they bought the company in 1999 from longtime president Philip Brown and other Brown family members.

“I think the key deciding factor for us was that you don’t get very many opportunities to buy a company that’s the best in its category and that has such a history,” says Champ Land III, vice president of sales and co-owner with his wife, Jean, who’s president. “It was really the opportunity to take the story and polish the apple, so to speak.”

The Lands had known casually about Troutman Chair Co. for years. Champ grew up in Lincolnton, and the couple bought their own Troutman rocking chair when the first of their three children was born 20 years ago.

When the company came up for sale, the Lands were living in Columbia. Champ, 53, was a manufacturer’s representative for one of the Lane Cos., now part of Furniture Brands Inc. Jean, 47, was managing two apartment buildings, encompassing 29 units, that the couple owned.

But when Champ heard from a friend that Troutman Chair was for sale, he couldn’t resist pursuing the idea.

“Champ has always had an entrepreneurial side of him that needed fulfilling,” Jean says. As for herself, she adds, “If I’m going to sell something or be a part of something, I really have to believe in it. It wasn’t a hard sell for me to believe in the company and the way it ran and what they make.”

The company, which celebrated its 80th anniversary last year, was founded in 1924. Troutman Chair is renowned for its rocking chairs – sturdy, high-back rockers with arms braced by anodized stainless steel and with seats and backs crafted of reed caning or slats.

The company also sells high-back chairs, a couple of sizes of children’s rockers, and small tables and stools. One popular new item, Champ says, is the plantation rocker, which is sized more generously than the company’s original rockers.

Furniture finishes also have been expanded. When the Lands took over, the only two were clear and unfinished, Champ says. Today, 90 percent of the company’s products are finished, including painted finishes in such colors as red, white, green and the almost-black Charleston green.

Troutman Chair manufactures personalized children’s chairs that are sold in the Plow and Hearth mailorder catalog. Its newest venture: making logo chairs for Harley- Davidson, a deal that was finalized in early July.

Everything is manufactured using swelled-joint construction, an old technique in which air-dried and kiln-dried oak and hickory are mixed so that pieces will shrink or swell (depending on their water content) to create a tight joint. The products also feature interlocked joints, which Champ describes as “built like a Lincoln Log home.”

The result is furniture with structural rigidity that lasts. (Champ likes to tell the story of sales representative Nick Melitis, who tells his commercial restaurant customers about the Troutman “Dividend Collection” – chairs that last so long, they don’t need to be replaced in the typical three to five years, thus paying the restaurant owner a “dividend.”)

The process, virtually start to finish, is all Troutman Chair.

The company purchases logs and cane from outside suppliers, but does everything else itself, from operating its own sawmill to managing sales and distribution. The company’s “just-in-time” manufacturing philosophy keeps unsold inventory at a reasonable level. (The privately held company does not release information on production, sales and revenue.)

The company has about 40 employees who work at its 40,000-square-foot manufacturing facility and separate warehouse. The plant manager, Bennie Brown, is a cousin of former president Philip Brown. “He (Bennie) is just so sharp and so smart that when we were talking, I told him that he couldn’t leave until I left,” Champ says.

Once sold only in six or seven Southern states, Troutman Chair products are now available from select retailers across the country, including several in the Lake Norman area. Fifteen sales reps take Troutman Chair’s story to customers (two focus exclusively on commercial customers, such as barbecue joints and fish camps).

“We have a customer in Germany,” Champ says, “and we send some chairs to California and New England.”

The product hang tag – Jean’s creation – eatures a high-contrast image of the company’s first delivery truck, a 1925 Model T Ford packed beyond reason with Troutman chairs, including one draped over the hood.

The image comes from an old photo Jean unearthed when she dug through the office shortly after the Lands bought the company. “In the original photo, you can see the knee of the gentleman driving the truck,” she says. “We’re thinking the photo was probably taken in the town of Troutman.”

To complement the hang tag, Troutman Chair has a “new” company truck: a 1930 Model A Ford truck, rich green with bright yellow wheels and a black roof. Champ bought the truck three years ago in an Internet sale from its previous owner in upstate New York. The Model A appears at Troutman Chair booths at trade shows and on location at Troutman Chair retailers.

The company’s office is computerized now, with the requisite PCs and word-processing and business software – and an old Tandy workhorse, a computer Jean knows well because one of her first jobs was selling at Radio Shack.

“When I got here, that’s what they were operating on,” she says. “I still have it. I keep it for label operations. Then no one has to bother anybody else.”

There’s even a Web site – www.troutmanchaircompany.com – but not much is online now, just a home page that marks the spot while Champ figures out what to display.

In this day of low-cost imports and trendy product lines, the unique blend of modern and traditional seems to be working well for Troutman Chair. As Champ says, “The phone’s ringing pretty good.”